In many migrant and refugee communities, many complex issues have already put these members at an immediate socioeconomic disadvantage. Issues may include geopolitical, war-torn conflict and stateless identity, domestic violence, unhealthy and neglectful relationships, gambling as well as barriers to the English-speaking world and the workplace—to name a few.

This not to mention women have often been raised to believe that their only chance in life is to stay-at-home with children and be homemakers. As a result, they were discouraged to access higher education. This only worsens when domestic neglect or abuse comes into the picture.

“These women need to be offered hope and opportunity to blossom….”

Angkor Flowers is a social enterprise employing women from migrant and refugee backgrounds with a low level of education and access to employable opportunities. In other words, they were raised in a cultural context of mere adherence to household duty, propriety and obedience – nothing beyond that. In order to give these women hope and help them blossom into more fulfilling and financially independent lives, founder and Managing Director Sophea Chea began Angkor flowers giving these women job, employment skills and training to boost confidence and personal development skills. “Helping people blossom” is not just our tagline for building empowerment and self esteem, it is also to plant the seeds for a more prosperous future. We use flower arrangement and crafts products as tools of pleasure and creativity as well as financial sustainability.
We specialise in designing various floral, hampers and craft products and services for individuals, small businesses and corporations, government organisations. Therefore we are ideally positioned to cater to any occasion, event or environment.

In short, we brighten up your day just that little bit more.

Established in September 2014, starting from social inclusion of a group of 10 Cambodian women, this enterprise now has reshaped the face of commerce and creating opportunities for better social impact while building successful entrepreneurship skills. We now offer training programs to women from similar cultures including Thai and Burmese before we can take them on board with our growing business. With this ambition, we are looking to attract and offer further support to women from other cultures regardless of skin colour.

Therefore, our business plan aims to accommodate rich and diverse employment opportunities to disadvantaged women as many as we can. We plan to expand Angkor Flowers & Crafts into a one-stop floral and decorative product and service to all stakeholders including individuals, government and non-government agencies, other small-to-medium businesses and corporations.

“And now it is your call and you have the power to make a difference to these women’s lives….”

The story Behind the Name

Angkor Wat is one of the most heritage-listed wonders of the world. It is the largest Buddhist monument of Angkor groups in Cambodia and an engineering marvel. The King Suryavaman II built the sprawling palace in the 12th Century when Cambodia was then the empire of Southeast Asia, dedicated to Hindu. To acknowledge and admire our native country, we thus named our business “Angkor Flowers & Crafts”.

Having grown up in a family oriented by her father with a firm but fair fist, Sophea had always looked up to him, whom she considered to be a rock star. However, like other young girls at her age, she was initially discouraged to advance further into higher education even though her family could have afforded the fact. This was due to the prevailing cultural belief that “women were planned to be homemakers and to look after children at home”.

However, Sophea did not let any out-dated ways of thinking deter her from her lifelong goals: she broke through gendered prejudices to turn her dreams of a better future into a reality. She won her family’s approval and thus changed their perspective on her ability to gain acceptance into post-graduate studies in Business, MBA in Sydney. Her commitment to task alone in turn won her high results from those studies. Today she works as a social worker supporting the resettlement process of new immigrants.

With this combination of personal experience and professional skills, Sophea came to realise that there was a need to create opportunities for migrant women. Many of these women have grown up in a culture that believes thatRead more

women do not need to be educated and that their role in life is to look after the home and children. This has created a cycle of financial dependency, either on partners or welfare. In combination with neglect, abuse and family violence, these women have been robbed of choices in life and deprived of the ability to stand on their own two feet. 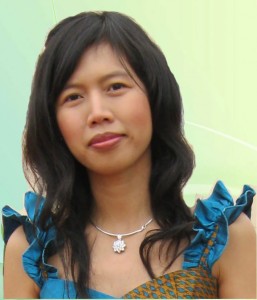 Sophea’s social enterprise, Angkor Flowers, has been established to provide these women with an opportunity to enter the workforce and create a stepping stone for future employment opportunities and choices. The business provides women from disadvantaged backgrounds with emotional support, skills development and employment opportunities so that they can blossom into a life with a greater degree of financial independence and opportunities for a better quality of life, both for themselves and their families.
Since establishing in 2014, Sophea has presented and led many benefits of her enterprise, none of which the least have offered untold hope and fruitful labour to disadvantaged women. “There were times when I stumbled and fell, and there were times when I thought I wanted to give up but my family and my peers has always held my head up high, showing the true importance of teamwork. So I keep moving forward,” Sophea enthused.
“The need of this project is becoming bigger and bigger all the time; now women from other Asian communities want to be involved and who’s to deny them that chance? At the same time, we require better business resources and outlays to accommodate our growing network of fantastic individuals who desire change.”

By end of 2014, Sophea had completed “Bankstown Change Maker Course” with the School of Social Entrepreneurs, thoroughly mentored by Co-creative Directors by William Uy Vu Le and Michael Turkic from “interCulture casting & management” (iCCAM), a boutique casting agency for all-inclusive artists. This has set apart her dream from the rest, making it more visible in term of structuring, branding and promoting the business. Katherine Blizard, from the Business Enterprise Centre at Southern Sydney has also kindly donated her time to improve Sophea’s entrepreneurship for the next phase of the enterprise.
In mid 2015, Sophea won the pitch competition with “Kick Starter Program” from Macquarie Group and through her work with her mentor Wesley Smith from the Macquarie group to tackle all aspects of the business plan for consideration, she has taken the title as the winner of the program at later of the year.She has been reward business and financial support from a business planning competition and small grants program.

“I am glad for all the support from individuals and organisations, including government agencies in ways that I can’t even measure. I know that I couldn’t have the capacity to do this alone. However, I can raise my voice to speak louder to all Australians on behalf of these many disadvantaged women who are simply escaping cruel, frustrating or unfortunate circumstances. It is up to how they voice their concerns and that they act accordingly and truthfully alongside their desires for change,” Sophea added.

Meet our women- How Has This Enterprise Changed Them?